Acts 8 Moment: We Dream of A Church 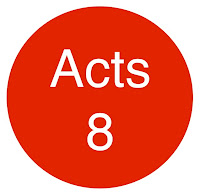 Last night, Crusty Old Dean, Susan Brown Snook, and currently-still-enjoying-detente-with Scott Gunn gathered a group of folks for what we have been calling our Acts 8 Moment.

Walking around Convention, wearing my Acts 8 button, as people look at my name tag, COD sometimes sees a flutter of recognition as they say, "You're Crusty Old Dean!"  This is usually followed by something like, "You don't seem that Crusty."  My usual reply is, "Well, not right now.  You should see me with my Crust on."

That flutter of recognition these past few days has been followed by, "So, what's the agenda for your meeting?"  COD mentioned this as we convened the group last night.  The reality is, we had no agenda.  We pulled this together because Scott, Susan, and COD have been reading each other's blogs, realized we had some common interests, and wanted to try to bring together some people with whom we had some common passions.  There was no action plan, we weren't stockpiling torches and pitchforks.

Crusty Old Dean shared why he was there: because I love this church.  I went to my 25th high school reunion a couple of weeks ago, I hadn't been to a single reunion before.  There were some jaw-drops as I shared what I had been doing, people were frankly surprised I had gone off and gotten ordained as an Episcopal priest.  Let's just say I wasn't a particularly pious teenager; I wasn't even an Episcopalian then.  Crusty Old Dean showed up last night because he loves this church, it changed and transformed my life, and loves this tradition of Anglican Christianity.

We had Bible study, on chapter 8 from the Book of Acts: how a time of upheaval in the life of the church actually became a moment of transformation.  We prayed together.

And we invited people to share their dream of what they wanted the church to be.  A collection of these dreams can be found here:

We also talked about what happens next.  COD shared with folks that Susan, Scott, and COD hadn't thought much about what Acts 8 would "do."  We agreed we should probably try to meet again later at Convention.  There was a groundswell of folks in the room, however, who did want further conversation about some specific things we might do -- so we broke up into affinity groups, where people that shared common interests and concerns could gather and talk.  Some wanted to talk about how we could pray for one another; others wanted to brainstorm on future leadership of the church; some wanted discussion on what specific proposals for reform we might put forward.  Crusty Old Dean was moved by the breadth and passion and commitment of those 100 or so people who showed up at 9:30 for a meeting, and stayed well after 11pm.

Crusty Old Dean didn't share his own dream about what Acts 8 might be, because he didn't want to get in the way of where the group might go, or interfere with the Spirit.  One of my main goals was to gather a group of people who are interested in thinking about how we might better do what we do as a church.  If you've read this blog much at all, you should know COD thinks we need to adapt some of the structures we have in light of a profound constellation of change that is sweeping over religious institutions.  Not throw everything out, not to marginalize anyone, and not disenfranchise anybody -- at times COD cynically thinks these are charges thrown about loosely by those seeking to stifle conversations on reform.

For instance, re-imagining how we might rethink and reform our governance does not mean we are becoming less diverse: I just don't see the logic in this.  If we cut the House of Deputies, say, from 800 to 500, how does this mean we are less committed to diversity?   If General Convention is not diverse, it is because our dioceses -- who elect deputies and bishops -- are not identifying, recruiting, lifting up, and electing underrepresented persons.  It won't matter if we have 2,000 or 200 deputies if we do not take a commitment to diversity in all forms seriously.  If anything, claiming that reform of our structures somehow will lead to disenfranchisement and lack of diversity is absolving the church of its continued institutional racism and placing the blame on reform as a straw man.

The real struggle coming up, as COD said in his GC preview, is what will happen in the next triennium.  Something will come out of this Convention which will be tasked with discussing reform of our governance -- and there will be an epic struggle to make sure this is lodged in the structures of Convention itself.  Well and good, as COD has said; obviously things like the Standing Commission on Structure must be involved and part of the discussion.  But there must be broader conversation, with broader involvement and buy-in that reflects the church as a whole.  COD is not convinced that change can come entirely from within, and a multitude of voices must have real involvement in these discussions and process.

Part of my dream is that those who came to Acts 8 might be the beginning of a network that can continue this conversation about restructuring and reform, should the institutional structures seek to take control of future reform discussions.  I hope and pray that a thoughtful and deliberate proposal will come out of this Convention to shape conversations in the next triennium; but if it doesn't, then my dream is to gather those who want to have those conversations.