Thoughts on Selling 815: It Ain't About the Building 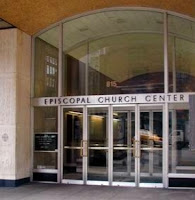 Notice that Crusty Old Dean didn't reference selling "815" (though he did in the title of this blog post, purely to catch people's attention, a necessary concession).  COD doesn't refer to "815" for several reasons.

For one, it makes the building is synonymous with staff, which simply isn't the case.  There are an increasing percentage of staff persons who do not work out of the building.  COD worked for the denominational staff from 2001-2011, and only spent two years, 2001-2003, with an office in New York.  From 2003-2011 he was based in different places outside of New York.  So I didn't say "815" because that's not where everybody works.  There's a Washington office, a Los Angeles office, and many people working out of different places.

For another, the denominational staff isn't a building.  It's people. 815 is an address.

COD's concern is not about "selling 815".  It's about a more holistic rethinking of what a denominational staff would be.  For many the building is a symbol, a relic, an idol, even, of a kind of establishment mentality -- as one person testified, "Constantine has left the building," referencing a kind of end of any notion of Christendom.  Well and good, to a certain sense.  We no longer have over 400 staff, nearly 100% of whom worked out of the building.  Yet who cares if Constantine leaves the building if we don't rethink the church?


COD has written a lot on this blog about what he thinks the future church will look like -- more network based, more focused around specific areas and concerns -- in short, more like 1850 than 1950.  For the vast bulk of the Episcopal Church's history, if you wanted to get something done, you gathered a group of like-minded people, formed an organization, and just did it.  If it had implications for the church as a whole, the General Convention might appoint a commission or committee to serve as a liaison and help coordinate the work.  The story of the 20th century is the consolidation, professionalization, and institutionalization of how the church organizes its mission work.

There's two challenges to this.  One has to do with the networks.  While we have lots of great networks in the church,  we'll need to make network development a key priority.  Provide resources and training to networks to help them do what they are going to be asked to do.  We will also need to work to develop new leaders for new networks, with training and resourcing.  Part of this will be done by dioceses and provinces, but COD thinks there will still be a place for denominational staff in this transition back to a future which will have elements of our past.

Another has to do with the denominational staff.  Denominational staff, correspondingly, are going to be folks who coordinate, resource, and develop networks -- there will be less "doing" on behalf of the church and more empowering and working with the church.  Just like the deacon in a church shouldn't "do" outreach ministry on behalf of the congregation, but should motivate, coordinate, and train the congregation to do that ministry.   There are lots of staff persons doing this kind of thing already, it will need to continue to be placed at the center of how staff relates to provinces, dioceses, networks, and other parts of the church.  One project COD had on the drawing board just before leaving staff, working closely with people scattered across the country, was to develop a network of seminarians and lay leaders under 35 interested and committed to interreligious dialogue and witness -- with not-yet COD (then he was EO) seeing his role in this project as a denominational staff person as providing an organizational, convening, and resourcing function, but letting the network itself choose and develop what it would actually do.

We can't stop at selling 815 and think we have slain Constantine.  COD is enthusiastically supportive of this resolution (I thought we should move most everything to the ELCA building in Chicago) with two caveats.

1)  We will need to be OK with the transition needed.  Those staff who may not be able to relocate due to personal or family concerns, including support staff as well as program staff, will be needed to be treated fairly.  Otherwise we will continue to pay lip service to justice, more than willing to lecture others without noticing the log in our own eye.  Like terminating a union service contract in 2009 without negotiation.

2)  We must also think broader and more holistically, and not rush to obsess over things like where the new denominational building might be.  We must also have conversations about what function our staff should have and how they will connect to all levels of the church.

If we don't begin to think in this way, it won't matter where the denomination gets its mail.
Posted by Tom Ferguson at 18:18