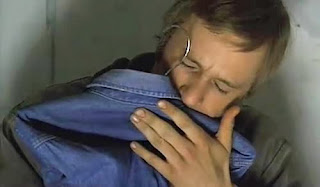 Crusty Old Dean is pleased that the Draft 2013-2015 General Convention budget has resulted in a extended discussion about mission, structure, and priority. Once piece which has been lurking in the background has been reference to the concept of "subsidiarity": that there are different levels of the church, and that some things are more appropriately done at certain levels. This was the given rationale in 2009 for cutting certain items from the budget, and it has been cited again in 2012. Mark Harris has helpfully pointed out the way in which this has echoes and implications for broader ecclesiological concerns in the communion, particularly the process surrounding the Windsor Report and the Anglican Covenant.

Especially as Episcopalians, we just can't quit subsidiarity. COD sometimes finds himself pressing the Constitution and Canons to his nose like Ennis breathing in the smell of Jack from his shirt in Brokeback Mountain.

On a certain level, we are stuck with subsidiarity. The Episcopal Church is, in essence, a kind of Frankentein's monster when it comes to this. We developed disparate and distinct levels of the church without thinking through how they relate.

For over 180 years, from 1607-1789, there was really only one level: the parish. There was no diocesan structure during the colonial period, no bishops in the colonies, nothing beyond the nominal oversight delegated to the Bishop of London, exercised at times through appointed commissaries. The Vestry developed in some parts of the colonies and gave lay persons an unprecedented (for its time) say in the governance of the church.

Then, much later, after decades of discussion and proposals (literally -- for about 30 years various proposals came up and were discussed) we not another level of the church: provinces were established. But initially their roles weren't defined and they weren't given any funding (hey! not much as changed!). Personally, one of COD's favorite proposals put forth at the numerous General Conventions in the 1880s through the 1910s was one which advocated for splitting into provinces, each electing an archbishop, establishing provincial synods with authority to amend canons, and having General Convention meet only once per decade. Makes the resolutions we get seem positively tame by comparison!

So while the 1789 founding Convention gave us three levels of organization, it left as much unsaid as it clarified. Each of these aspects -- some aspects being clearly defined and others not so much -- is important.

On the one hand, the General Convention has a kind of universal jurisdiction and authority. It can reach down to the local level and tell parishes what they can and cannot do (they must use a liturgy it authorizes; they must hire a clergyperson recognized as duly ordained by its definition; and so on). It can tell dioceses what to do: they must have a Standing Committee whose members have to sign off on specific matters. The only body that can amend the Constitution and Canons is the General Convention itself, and these amendments are usually ones of clarification, not limitation. Anything not strictly prohibited the General Convention can do, at least in a governance sense. It established provinces, for instance, because it can more or less do what it wants. For Anglicans who have recoiled from the Papacy's claims to universal jurisdiction, it's a bit ironic American Episcopalians created a kind of corporate papacy.

On the other hand, the 1789 Constitution specifically did not dictate some matters. Dioceses are supposed to choose bishops, but there's no specific procedure for that. A diocese could choose a bishop by casting lots and not be in violation of the national canons. It tells parishes to use an authorized liturgy, but not whether they have to have Morning Prayer or the Eucharist on any given Sunday. It set out areas of competence required for ordination, but has never required any specific degree (unlike some denominations, which require the MDiv unless certain dispensations are given). And so on.

This led to a different kind of subsidiarity developing: the notion that any level of the church is free to organize itself in any way they see fit, so long as it does not contradict any other level of the church -- with a specific hierarchy involved. The Canons of the General Convention take precedence over diocesan canons; diocesan canons over parish bylaws. This is a reflection of the inherent decentralization impulse in the Episcopal Church, a legacy of 180 years of having no structure at all, combined with the general impulse in American Christianity to distrust centralized authority. As the church historian Marty Martin once put it to COD (shameless church nerd name dropping), "In a sense, all American Christians are little bit Baptist."

So we have our own kind of subsidiarity, one built deeply into our structures and which, to a certain sense, we simply can't shake: part of being Episcopalians is this balancing of the local, diocesan, provincial, and denominational levels.

At times we have emphasized one level over another: in the 1800s, there was very little structure in the church at the diocesan or national levels, because we did things through other kinds of structures and mechanisms, go here for that conversation. The 20th century was a period of professionalization, centralization, and institution building: the way the federal government and denominational structures looked in 1960 was profoundly different from 1900. We emphasized that level of the church in a developing arc through the 20th century.

About for the past 25 years or so, we have seen the beginning of seismic shift away from that kind of centralization, with new understandings of the nature of community and relationship to institutions, with changes brought by factors as disparate as the internet, social media, globalization, and so on. There's lots written on this; check out Faith Communities Together's survey here, some of the Barna Group's work here, the massive Pew Research study on religion here, order Diana Butler Bass's excellent new book on this kind of thing here, and so on, to get a sense not of what is coming down the pike, but what is here, has already happened, and we're waking up to.

So on one level there's no need to fear subsidiarity; it's built into our structure, and at different times, for different reasons, reflecting different seismic changes in our society and our world, we have emphasized different levels.

On another level, however, the way subsidiarity is being used in some ways in our current conversation is so inchoate, slipshod, and disingenuous so as to poison the efficacy of the term at all -- for several reasons.

1) There has been no systemic efforts to try to figure out which ministries of the church are best done on which levels. They have simply cut by de-funding program, based on limited input from the broader church, without considering cooperation or collaboration with ecumenical partners, ignoring decades worth of General Convention resolutions specifically committing us to certain things, with a relatively small group of people making these decisions in a budget that is simply presented to Convention for approval. Our budgeting process at times reflects a Politburo mentality, with the GC in the role of the former Soviet or current Chinese rubber-stamp Parliaments. I have said this before, and I will say it again: we have never had any kind of churchwide discussion about what should be done at what level. We certainly could: it can, and is, being done in other contexts. The United Methodist Church developed a detailed, churchwide conversation about their restructuring plans. The current budget slashes youth ministry by 90%, blithely saying it should be done at the diocesan level, while the ELCA, certainly struggling with financial realities, gets over 30,000 registrants at their triennial youth event. This current draft adds over $1 million in salaries tostaff in Human Resources, the Treasurer's Office, President of the House of Deputies, and Presiding Bishop's office while cutting massive amounts from youth, young adult, and formation ministries. It redirects money from support to domestic dioceses to Province IX without any discussion as to why and for what reasons. And so on; read here to get it all in excruciatingly snarky detail from COD.

Rather the polity of our subsidiarity recognizes that different levels of the church have different roles to play, different competencies, and different vested interests in any given area. Dioceses can choose bishops any way they want, but they have to be confirmed by the church as a whole because of how we understand episcopal ministry. Parishes choose their clergy who must be licensed by the diocesan bishop and must fulfill criteria laid down by the General Convention.

Simply deciding what ministry the denominational structure will no longer do is not empowering the church, it is reinforcing the worst aspects of hierarchy. Again, we are not having the real conversation. Instead of dumping things on various levels, the General Convention could be identifying priorities and asking how different levels of the church can collaborate, with General Convention itself becoming the networking-building opportunity par excellence instead of the deadening legislative kabuki theater it increasingly resembles.

COD has said it before, and will say it again: reject this budget and the process which has created it. It does nothing but reinforce the death spiral our church is heading, is the last gasp of an ineffective hierarchical structure, and keeps us from having the real conversations we need to have. Let's put the resources in people, structure, and funding that we do have to the best purposes decided on in a truly consultative and democratic fashion. A corporate papacy is no better than the papacy we broke from 500 years ago.
Posted by Tom Ferguson at 21:34