In a move likely to send ripples through the Anglican World, Archbishop of Canterbury Justin Welby announced he is imposing consequences against part of his own brain.  Bishop Nicholas Chamberlain of Grantham has announced that he is in a long-term gay partnership (albeit celibate) and that the Archbishop knew of this before his appointment: "People know I’m gay, but it’s not the first thing I’d say to anyone. Sexuality is part of who I am, but it’s my ministry that I want to focus on."  He also
helpfully clarified that he is bishop of Grantham, not Grantchester, and unfortunately his long term partner is not the smoking hot priest from the television series of the same name.  "Yeah, I wish," he responded when asked by a confused American reporter.

Archbishop Welby confirmed Bishop Chamberlain's statement that he knew of the bishop's sexual identity, stating that "I am and have been fully aware of Bishop Nick’s long-term, committed relationship. His appointment as bishop of Grantham was made on the basis of his skills and calling to serve the church in the diocese of Lincoln. He lives within the bishops’ guidelines and his sexuality is completely irrelevant to his office."

The ensuing backlash, however, has caused Archbishop Welby to impose consequences on that part of his brain that believes sexual identity to be irrelevant to the episcopal office.

In January of 2016, the Primates imposed "consequences" on The Episcopal Church for amending its marriage canons to permit same-sex marriage.  For a period of three years, The Episcopal Church will not participate in any discussions on doctrine or polity at the Communion level, or represent the Anglican Communion in ecumenical committees, or be permitted to serve on any decision making bodies.  Subsequently, Archbishop Welby has confirmed  that although this was initially presented one-time decision, it turned out after all not to be a one-time decision, but that a disciplinary process has been put in place that will be used for any other decisions taken by any province which contradict whatever the primates think at a given time.

And the Primates have spoken.  "Celibate? Does he really think that we're buying this?" said one Primate.  Another released an official statement declaring that, "Lambeth 1998 condemned homosexual 'practice' as contrary to Scripture, and living in a long-term committed partnership, even if it is celibate, certainly sounds like they have been practicing at being gay for years."  A third primate declared, "We must close the 'homosexual practice' loophole.  At the next primates meeting, I
will introduce a resolution that owning more than one item from the Williams Sonoma catalogue should be the standard for defining homosexual practice."  On the basis of these statements, since the primates function with no transparency, Archbishop Welby stated, "After consulting with myself, I have determined I have violated Resolution I.10 of the 1998 Lambeth Conference, and thus must face the same sanctions with which I have repeatedly threatened other provinces of the Communion."

At his press conference, the Archbishop outlined how these sanctions would work. "It is important to separate the different ways the Archbishop functions," he said.  "I will no longer take any advice from that portion of my brain that thinks sexuality is irrelevant to the episcopal office ONLY when functioning as an instrument of communion of the Anglican Communion," he helpfully clarified.  "In my office as Primate of All England, or diocesan of Canterbury, I am free to take advice from that portion of my brain."

Josiah Idowu-Fearon, Secretary-General of the Anglican Communion and also present at the news conference, provided helpful clarification as well. "I have made it clear my belief that Lambeth I.10 is binding on the Anglican Communion even though Lambeth Conferences are not binding and therefore agree with Archbishop Justin's imposition of sanctions on that part of his brain which has deviated from this. For the 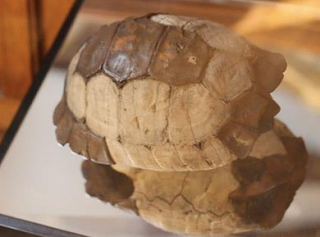 next three years I will no longer take direction from Archbishop Justin on matters of ecumenical relations or doctrine and polity, given the westernizing progressivism he has demonstrated.  I will, instead, report to the shell of Archbishop Laud's dead tortoise for oversight in these areas."

The shell could not be reached for comment.
Posted by Tom Ferguson at 08:57