The Lies of Justin Welby; or, rather "Alternative Facts"

Hey, friends in the Church of England:  it's Crusty here in the USA.  Normally, COD tries not to get involved in the internal workings of other member churches of the Anglican Communion, in part because he's spent most of his adult life listening to people who know little to nothing about how The Episcopal Church actually functions and works lecture us.  (BTW Crusty has also called out the shocking ignorance of many in the Episcopal Church as to how other provinces of the Communion function, to be sure this goes both ways.)

However, gven what happened at the General Synod of the Church of England, thought I might offer you all a little advice, given our own experiences.  But before we do, let's recap for readers in Crustyland:

The House of Bishops of the Church of England engaged in some extensive three-year "listening" sessions around issues of same sex marriage, and produced a report to be sent to its General Synod

(which, like the Council of Trent, always seems to be in session.  Crusty can barely deal with General Convention once every three years, he has no idea how the C of E handles this multiple times a year).  The General Synod did not pass a "take note" resolution in the clergy order, which, more or less, means the Synod chose not to receive the report.  This has caused no small amount of kerfuffle, with multiple knickers being twisted, and many at sixes and sevens at things going so pear shaped at the refusal to table this motion (Crusty promises to stop the English idioms here).  The Archbishops of Canterbury and York have issued a letter outlining a way forward, which will include *more* listening with bishops, establishment of a Pastoral Oversight Group to work with dioceses on what is permissible under current guidelines, and proposing a debate at the next Synod of human sexuality.


Take it from your Episcopal Church colleagues -- don't be fooled, friends.  The current Archbishop has shown a consistent pattern of weaponizing listening processes to create extra-juridical and exrta-canonical disciplinary procedures accountable to no one, and his willingness to outright obfuscate and lie.  Let's recap:

1)  In January 2016, the Archbishop hosted what was billed as an informal gathering of primates, not an official primates meeting.  It came up with a series of "consequences", voluntarily accepted by The Episcopal Church.  Shortly afterwards, the Archbishop began consistently referring to this as a Primates Meeting, and that it had established a disciplinary process to be used in the future for any provinces which would change their marriage canons.  What began as an informal gathering where the Episcopal Church accepted consequences is now a Primates Meeting that has set up a process that can be used to threaten other provinces.

3)  The Archbishop also presented his own alternative facts with regard to the Anglican Consultative
Council meeting in April  The ACC rejected consideration of a resolution which would have received the full report of the January, 2016 primates gathering, adopting instead a resolution naming the report and stating it had received it.  After the ACC adjourned, the Archbishop released his own statement, where he had the unbelievable gall to state, unequivocably: "By receiving my report, which incorporated the Primates’ Communique, the ACC accepted these consequences entirely." This is at worst an outright lie to deceive or at best a disingenuous obfuscation.

4)  Not content with this, the Anglican Communion New Service went on to state that no Episcopalians voted on any matters related to doctrine or polity at ACC-16, as part of the ACC's implementation of the sanctions against the Episcopal Church..   The Episcopal Church members 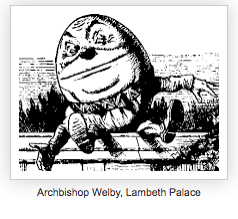 responded by stating they voted on all matters before the ACC, which forced the ACNS/Ministry of Truth change the lie to spin: "This article was updated on 2 February to make clear that no formal votes were held on issues of doctrine and polity at ACC-16. None was necessary because all such matters were agreed by consensus." Crusty feels the need to note that consensus is a form of voting.  Archbishop Humpty Dumpty lives!

'When I use a word,' Humpty Dumpty said, in rather a scornful tone, 'it means just what I choose it to mean — neither more nor less.'

'The question is,' said Alice, 'whether you can make words mean so many different things.'

'The question is,' said Humpty Dumpty, 'which is to be master — that's all.'

So I hate to break it to you, Church of England friends -- this isn't over.  The Archbishop has shown his willingness to use listening processes as Trojan horses for substituting heavy-handed discipline, to subvert structures and supplant it with extra-canonical forms of governance, and simply to ignore, lie, and obfuscate any objections in the process of creating his alternative realities.  The Anglican Communion Covenant was not
approved according to the polity of the Church of England; he simply tried to get the prohibition on same sex marriage through his Listening Process.  Had the Synod voted to note the report, one could bet it would have been spun as endorsement of all its implications by the Church of England.

So don't be fooled by the change of tone and the promises in the Archbishops' letter.  Whatever process he is setting up, he'll subvert it, just as he has done with the Episcopal Church, the Scottish Episcopal Church, and the Anglican Consultative Council, to push through what he wants, and then bend reality and fact to support those actions.  In his recent address to General Synod, Archbishop Justin gave some warnings about President Trump and the rise of right wing movements in Europe.  Yet Justin has shown a willingness to ignore democratic structures and bend reality to shape his own intentions.  Despite his condemnation of Trump, Justin should look himself in the mirror and see some disturbing parallels.  But please, for God's sake, let's hope Justin doesn't start tweeting at 5 o'clock in the morning.  That's about the only thing that can make this worse.
Posted by Tom Ferguson at 12:03